Pulling g’s in 3D: pushing the limits in rock climbing and high-performance driving

Prior to about a month ago, it’d been over a year since I’d done any performance driving. I ran Laguna twice last year, Buttonwillow for the first time (configuration 1CW), and had my last track day in April at Thunderhill Raceway – with lush green grass all around! I’ve included my best laps from each track for quick reference and your enjoyment!

Then as summer approached, I got heavily into work, R&D, and managing family situations. I’d be jonesing for action through the end of 2016, and through much of early 2017. Happily, I knew our customers were loving their FCM Elite setups, though this Fat Cat’s gotta race, too!

But I also realized just focusing on track and autocross without integrating my whole body left out a big part of the whole story. Years ago, I felt the necessary symmetry (for me at least) between being comfortable in my body, having a healthy body, and being able to really push myself to the limit. I’ll share about that later on…

Hunting on Motorsportsreg.com, I saw an autocross at Marina Airport (near Monterey) with Loma Prieta Porsche Club of America. Then I found a couple more events that were appleaing – but here’s the kicker – they’d all be within a week of each other! All told, these events were:

I contacted Anne Roth, event coordinator for LPR PCA, and was allowed to enter as a non-PCA member. For that event, I brought Christina, our E46 BMW 330i, and intended to run the 285/30-18 BF Goodrich R1 S race compound tires. It took about 4 runs to get enough heat in those wide tires, but I felt good about my driving, Christina’s manners, and the day overall including some fun networking and conversations:

My last and fastest morning run in Christina, with Loma Prieta Porsche Club of America

I also had fun helping a Porsche Boxster owner dial some understeer out of his car. I told him I’d had success trimming from the top of the front bump stop and we also added some rear spring rubbers. Watching his later runs, the car was much more neutral and he took some time off his runs. COOL!

Up the next day (Monday) was a track day with Golden Gate Lotus Club at Mazda Raceway Laguna Seca. I’ve always appreciated the way GGLC manages their events and have confidence running with them. I haven’t driven Laguna in over a year and a half and it’s been over a year since I’ve been on track so I wanted to take it easy before getting to the full limit of my abilities.

I met up with Mike Shapiro who has been a long-time HPDE / track rat in pretty much everything you can name. That day with Lotus Club he brought out an turbo-charged SVT Focus – but unfortunately on the first session of the day the motor blew. You can see them parked just past Turn 6 in the Session 1 video. Near the end of the session I was chasing down a Porsche Cayman and he ended up looping it going into Turn 11. Check out the full video!

and my comments on the last part of the session after the Cayman’s spin:

Session 2 was good overall. However, after some initial polite point-by behavior with other drivers, I ended up behind a different Porsche Cayman with an owner who clearly didn’t understand the point-by rules.

As a reminder, we were in Intermediate group which has more open passing rules where point-by isn’t required but a good practice. I did realize that keeping my emotions under control is essential. It also shows that if you aren’t ready to be passed you might be better off in beginner group (though many egos don’t allow for that).

My 3rd session (which was technically session 4 for the event) was particularly fun and my favorite one because I had a passenger, Steve, who wanted to experience Christina first-hand. He is a Miata owner and track driver, though has been considering another car – perhaps a BMW E36 M3 or E46 330i, as an upcoming track car.

It was a great time and I managed to stay within a few seconds of a BMW M4 on Nitto NT01 in about 265/295 size – so the car had grip! It suspension looked to be the factory EDC / Damptronic Bilsteins so I’d like to say I had an edge in confidence and at-the-limit predictability. Another 100 hp and I’d be passing HIM! 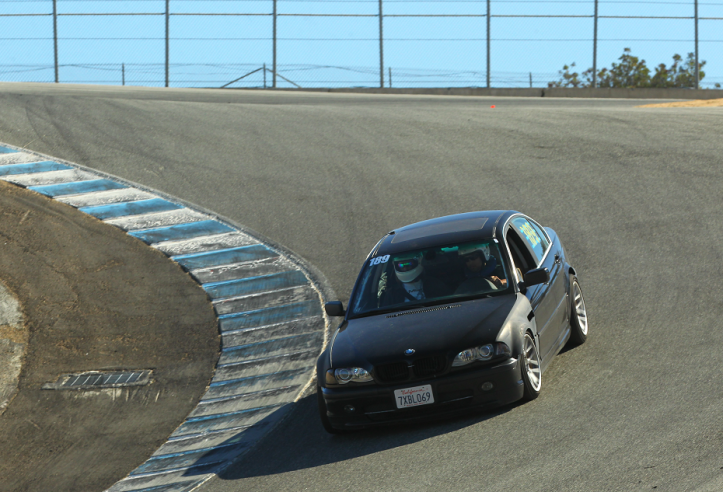 After the session I was debriefing the session with Steve, which happenstan-cidentally became it’s own video (GoPro seems to like to stop recording at 17:43 then begin another video!).

The third and final race event of the week was a Porsche Club autocross at Alameda (formerly a Naval Air Station) which I decided to take Bastian to, for his first-ever autocross. Andrew Blyholder is the online coordinate for GGR and he also gave me access to their event. I’d only run the site once, about two years ago when San Francisco SCCA briefly had access to the site. It’s a wide, expansive, pretty grippy concrete site in a very picturesque location! I certainly envy the Golden Gate Region Porsche folks for having access to it, and another good reason to become a Porsche-driving PCA member!

Bastian certainly tended toward on-throttle oversteer with the Kumho Ecsta tires (~300 treadwear) and otherwise stock Hard S suspension (though the previous owner had put on Showa instead of the factory Bilstein which I fully understood!). I had brought a race jack,some packers, spring rubbers, and zip-ties since I figured I might need to add some additional front spring rate. After the first run (which I spend most of sideways!) I did put in one ‘red’ or soft-density spring rubber on each front spring. It was similar to what I did with the Boxster the previous weekend at Marina but he needed help getting the rear to rotate while Bastian has TOO tail-happy.

That single change helped make the balance more neutral, with a bit more initial understeer so I had to be deliberate about getting weight on the front end before turning in. The next 3 runs (4 in total) I was able to improve fairly markedly and my best time was faster than several Boxster and 911 owners were reporting. There were some ridiculously quick 911 GT3s there many seconds faster, but for Bastian’s setup level I felt good about his performance.

A few days after the Alameda autocross, I was really craving some physically intense exercise. I’m not much of a gym guy, don’t like running as it taxes the joints, and hiking doesn’t offer quite the satisfaction or intensity I seek. Inspiration struck me and I realized I was rather close to Planet Granite Belmont, an indoor rock climbing complex that offers yoga lessons and has a work out / weight room. Basically, everything I’d want and need!

It’d been 12 years since the last time I climbed and I needed to review and get checked out again on belay technique so I took a class for $25. It included use of the climbing wall and I did a few routes that were just challenging enough to get me back in. I ended up staying at PG for about 3 hours and found a few spontaneous climbing and belay partners.

It was GREAT! Exactly what I needed, and had been needing! I ended up sore for several days, especially my upper body and in muscles I didn’t know were there. Another motivation to get more yoga and stretching to keep my joints and muscles flexible and supple. One activity complemented the other. I was SATISFIED, and it was such fun – such a challenge! Just like with competition driving there was always something you could work on. The combination of planning your climbing route, knowing where to place your feet for best leverage and stability, using your hands to balance and guide your movements, and the intense physical exertion made for a fully immersive experience! It was related to racing in many ways, but in the vertical direction and just as methodically.

I know I’m a bit heavier than I need to be, and for racing added lightness is always a good thing – the driver’s weight is the #1 place to start. I feel the awesome synergy between seeking g’s in the horizontal plane, and defying gravity in the vertical plane. My current climbing ability is about 5.9. Last time, I managed a 5.10a with a couple rests on the rope. I know my next time at the gym (this week) I’ll be going for that 5.10a in a single attempt. I can be planning adjustments or changes to my suspension during the week while my body is healing, growing, and strengthening and I’m imagining the ideal climbing route. There are far more vertical routes than there are race tracks which also makes climbing very exciting! I think I’ve found the best balance of outdoor and indoor activities for me at this time.

I also really appreciate running with Porsche Club. Having spoken with a number of informed owners, I’m more eager to buy a Porsche than before once I’ve sold Senna, our 1995 M-edition track Miata, new asking price $10,000.

There’s another PCA event coming up and plan to have a better-tuned Bastian for. May drive out with a friend to give Christina some track time, too. Plus, in a couple days, I’ll be ready for another vertical limit session at Planet Granite. Life is good!